Quite often Chinese characters were rough sketches of the objects they
represented. Over the years they became so refined that much of their
pictorial quality was lost. However, a few of the simpler ones still
exhibit the delightful relationship between word and design. For
instance, [Chinese ideogram/river] is a kind of 'found poem' in which we experience the flow and the spirit of a river--of all rivers. In [Chinese ideogram/tree] not only do we see what a tree is--its branches and its
roots--but understand its 'way': its essence. We see into the life of it.

Western script, with the exception of Native American writing, is
visually lifeless. We 'read' river or tree, but do not look at the
word. Though we do not and can not have a visual language like the
Chinese, it is possible to see the poetry of a 'thing' through its name.

unaloud haiku attempt to blend the verbal and the visual by drawing
not only with a typewriter but with a word. Whereas

suggests the form--petals and center--of a flower, the word 'violet'
contains the number of letters, including an 'o', to produce: 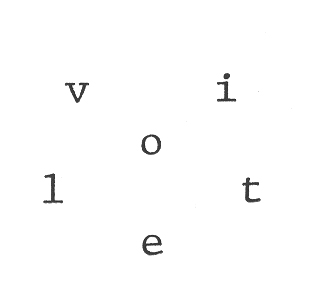 Perhaps, we begin to see that the normally written violet has an
unexpected form--a visualness, though in the mind--which enhances its
sound.

Many words have in them an element of themselves. An owl is much more
than its eyes, yet, quite often it is the eyes we are drawn to:

In another kind of unaloud haiku, the word can be arranged to express
the motion of the thing. For instance, in the unaloud below, we do
not read 'f r o g frog,' but experience the frog stretching through
the air and landing, in tact, ready to leap again. The frog is the
poet; frog-nature is the poetry:

Another aspect of a frog is its singing. We hear the sound, but
rarely find the singer:

Some unaloud haiku are not unaloud, but rather invite a reading--or,
as in the case of 'coyote', a howling:

we hear and see why we hear the word--and the insect. [krik'it composed with markings over i's as in dictionary]

Other unaloud haiku are quiet pictures: 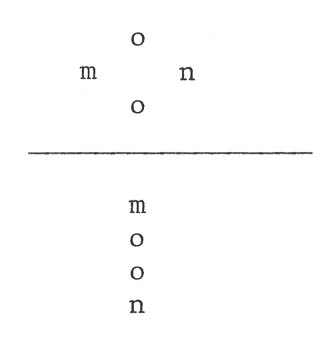 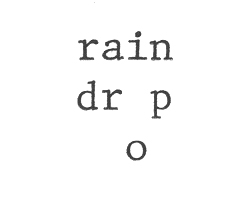 Many poets, Whitman, Sandburg, Benet and others, have been in love
With the names of things. Often, in their poetry, they simply list
things--as do haiku poets (haiku being the poetry of nouns).

The aim of haiku is to express the prime phenomena
in words. The idea of becoming is presented with
as little material as possible. This paucity of
material is the cause of the deceptive simplicity
of haiku, and this simplicity is in itself an appeal
to the reader for all his [sic] delicacy and depth of
poetic feeling.*

note: These 'unaloud haiku' (pun intended) were created in Elite type
and spacing; the computer's Pica spacing widens the design.